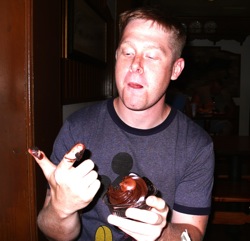 Now that we outlined the programming languages for automating shell scripting, virtual machine creation ,network provisioning and os installation and beyond, I bet you as a devops are eager start writing your infrastructure code.

After some time chances are that you will end up with lots and lots of scripts executing in sequence. And then when you change something in a script the whole sequence will fail and you'll have a hard time looking for what caused the problem. A better approach for writing your code is to practice Test Driven Development.

In short before writing any code, you first write a test for the code you are writing. Then you run your tests and see that the new test fails.(RED). It is only then that you start writing your code or change your existing code (REFACTOR). When you think the code is done, you run your tests again and see them succeed (GREEN). And then you continue to use this cycle to grow your code. It is important that you chance your code in small increments. For more infor see Test first guidelines.

Benefits for the sysadmin

So how can this help you as a sysadmin? Isn't this more of developer thing? And the answers is a big NO:

Yes, but won't this slow me down? Well this is exactly the reaction most developers have to this process. But to me the benefits should be clear, do you rather go for the fingers crossed go live or the verified state. You will have to find the right balance between writing all tests and writing no tests.

If you are working on a new project that tries to get something running as quickly as possible as a one shot, you'll probably be under pressure to deliver. It will take some time to reach the skills to get the automation and the tests in your fingers. Still a good way of convincing management is by explaining them that these tests not only for the project phase but can be used during the whole maintenance period. This definitely increased the ROI of writing these tests.

Part of a test there usually is a setup and a tear-down part. The idea is to create a state under which you start performing your tests. For applications f.i. this would be to put the right stuff in the database, set the right variables. So how does this translate to machines? Most of the virtualization solutions allow you to do easily take snapshots of both your memory state (savestate) and your disks. So you can easily recreate a certain point in time to start your tests by cloning your systems and running some scripts to change the state (f.i. filling a disk, killing a process) . Another approach could be to take snapshots of your disks using filesystems like ZFS, LVM that easily let you take snapshots.

This also helps during the coding of your infrastructure:

In the following example I will describe the setup of a webserver which serves static pages. Note that there is no standard development involved here. It's all about pre-packaged software.

In this step you would define the hardware of your virtual machine: number of CPU's, memory, network interfaces, mac addresses, disks, ... So how do we test this? In the days of physical hardware, the way to verify that systems had all the hardware in it, we booted up a CD and verified using commands that the system contained the correct number of disks.

To avoid writing your own boot CD , you could use something similar to sysrescueCD. It has a feature called autorun that allows you to boot up the disk and execute scripts that are either on a floppy, disk, NFS or Samba share or HTTP server. If you mount this as a virtual CD in your virtual machine, it can boot up the virtual machine and execute test to test if the definition was according to what was specified.

Next step is provisioning the network information for your virtual machine. In order to test this, we can easily use the same boot CD approach to verify this via scripts using dhclient, dig, tftpclient. Some might argue that this test is better done from within the OS. Off course testing is when the OS is installed is a more complete tests. Doing this test separate from the installed OS, lets you better distinguish where the error occurs. Is it a problem of the OS driver that there is no IP address or is is a problem with the definition of the DHCP/DNS.

This is usually done by defining a kickstart/jumpstart template. It would contain the disks partitioning, network configuration, the minimal packages and patches, a set of minimal services enabled (ssh, puppet), selinux enabled , . As you see there is a lot more that can be tested here:

Up until now these tests are simple checks , and probably most people will do similar things in their monitoring. I've talked about testing being more then monitoring. Aside from these simple checks you can complementing your monitoring to run scenarios. Also destructive tests like failing a disk or bringing down an interface are probably not the best thing to do in production monitoring ;-)

So aren't we re-testing the packages here? The problem here is packages are often tested in isolation from each other and they can only test a limited number of setups. That means it still makes sense to repeat some tests so see if YOUR combination of things actually works.

Step 4: Apply recipes for the webserver

We now have a tested minimal OS running with a configuration mgt system active. Next in line it applying recipes. While discussing these with a number of people , I heard a lot that you don't need tests because these tools work in a declarative mode: if something doesn't work then it's either an error in your recipe or an error in the configuration management software.

I personally disagree, the argument is similar to why we test even if individual packages are tested: you can write a beautiful recipe to install a webserver but maybe the firewall is preventing you access, maybe your SELinux is blocking things. Or you install a bad apache config file so that it uses the wrong directory to serve.

Programming languages have developed a lot of frameworks over time to help in writing tests. When coding your infrastructure in these languages check what's available. Still there is no test library that is specific to systems testing. The closest are test frameworks for HTTP testing.

Currently this is an emerging field. There are already a lot of examples in the wild. As we adopt more the idea of testable infrastructure, these frameworks will emerge. The most notable is cucumber-nagios written by Lindsay Holmwood. It brings http testing closer to monitoring and into the sysadmin world. Now you can reuse your tests written in cucumber in your monitoring environment.

After a discussion at devopsdays 09 Lindsay is starting on a similar thing that allows to integrated ssh scripting in this framework, or what he calls Behavior driven infrastructure through cucumber And recently he announced on the agile system administration mailing list that he's joining forces with Adam Jacob of Opscode. So definitely more to come!